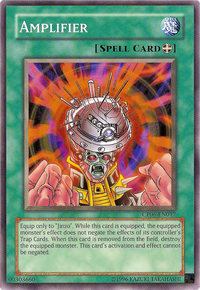 Jinzo appears in this card's artwork. So far, this is the only Equip Spell Card whose activation cannot be negated. This card's OCG/TCG artwork is taken from , specifically from the panel showing Jinzo being equipped with this card. However, its hands are raised in this artwork in contrast to that manga appearance. His hands are also bare, compared to Jinzo’s anime appearance where he wears gloves.

Note that "Amplifier"s activation and effect cannot be negated. This is written on the card.

If you equip "Amplifier" to your opponent's "Jinzo", then your opponent can activate Trap Cards and they will not be negated.

If the controller of "Jinzo" with "Amplifier"Regulation of Tribe", "Spatial Collapse", "Robbin' Goblin", "Robbin' Zombie", "Curse of Darkness", etc., their effects are not negated, but if the opponent activates them, they ARE negated.

If your "Amplifier" is switched from your "Jinzo" to your opponent's "Jinzo" with "Tailor of the Fickle", then your Jinzo is not destroyed.