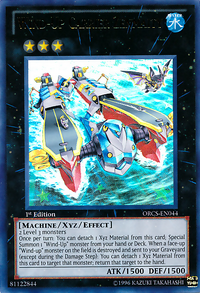 Just as how jets take off on aircraft carriers, this monster Special Summons Wind-Up monsters from your hand or Deck, reflected on two carriers on each side. Two Wind-Up Bats and one Wind-Up Snail appear in this card's artwork. This monster appears in the artworks of Wind-Up Arsenal Zenmaioh (forming the hips and legs) and Ghost Salvage. This monster's appearance is similar to Dark Flattop, as they are both aircraft carriers. This card's name is a play on the Japanese name for the Wind-Up archetype, Zenmai, and the word mighty. The name Zenmaighty (the OCG name) was changed into Zenmaity for TCG release, regardless of existing wordplay, in a reference to pirates. This monster is a naval war vehicle, an aircraft carrier. This mirrors the other Wind-Up Xyz Monsters Zenmaister and Zenmaines, which are an aerial war vehicle and land war vehicle respectively (excluding the boss monster, Zenmaioh, who can be viewed as the general instead). This monster resembles Submersible Carrier Aero Shark in a toy form, considering that it has the same Rank and Attribute. This card is the first Xyz Monster to become Limited, and eventually Forbidden. It is also the first Xyz Monster to be on the Forbidden & Limited Lists. It is also the first Wind-Up monster to become Forbidden, and one of the two Wind-Up monsters to become Limited, the other being Wind-Up Magician.

The effect that activates when a "Wind-Up" Monster is destroyed and sent to your Graveyard cannot be activated during the Damage Step.

The effect that adds a "Wind-Up" Monster to the Hand can be activated by selecting an Xyz Monster.