8Cannot be Normal Summoned/Set. Must be Special Summoned with "Bonding - H2O". The ATK of FIRE monsters and Pyro monsters on the field becomes 0. When this card is destroyed and sent to the GY: You can target 2 "Hydrogeddon" and 1 "Oxygeddon" in your GY; Special Summon them.2800/2600
CARD ID: 85066822
Powered by yugioh.wikia.com 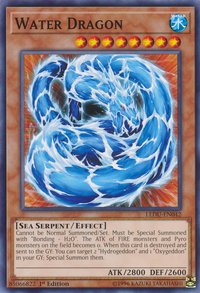 This card has an upgraded counterpart: Water Dragon Cluster. This card also has an unnamed fire counterpart shown with Bastion, but never seen in the anime or manga. This card's ATK is 1000 points higher than Oxygeddon's and its DEF is 1000 points higher than Hydrogeddon's ATK. This card's summoning method is a representation of chemical synthesis. This card's Continuous Effects is a clear representation of water's effect on fire. This card's final effect is a representation of a chemical breakdown from water back into its component parts, hydrogen and oxygen. This card, Valkyrion the Magna Warrior, Meklord Astro Mekanikle,Gate Guardian Flying Fortress SKY FIRE, and Machina Force are the only TCG/OCG combined form monsters that are neither Fusion Monsters nor require their parts to be banish to summon it like the A-to-Z series and Armityle the Chaos Phantom. Also their Summoning Conditions are very similar. This card's name and appearance is aesthetically similar to Aqua Dragon. It also shares the following in common with Mythic Water Dragon: Similar names and appearances The same Attribute and Level Both of these card's effects have a different monster Attribute as a prerequisite for their effects (this card in-part drops the ATK of FIRE monsters to 0 and Mythic Water Dragon requires an EARTH monster to be on your Field for it to be Special Summoned.) Furthermore, these said Attribute criteria are two things that water in real-life is strong against (water inhibits fires by cutting off oxygen, one of a fire's catalysts and it also weathers, or erodes most earth-based materials.)

When this card on the field is destroyed and sent to the Graveyard, its Optional Trigger Effect activates. You must have at least 2 "Hydrogeddon" and 1 "Oxygeddon" in your Graveyard to target, otherwise the effect will not activate. If you have 3 correct targets, the opponent can chain "Disappear" to banish 1 of the monsters, but the other 2 will still be Special Summoned.

The effect of "Water Dragon" that activates when it is destroyed targets 2 "Hydrogeddon" and 1 "Oxygeddon" in the Graveyard.

If you do not have 3 open Monster Card Zones after "Water Dragon" is sent to the Graveyard, you cannot activate its effect.

If "Water Dragon" was face-down on the field when it was destroyed and sent to the Graveyard, you can still activate its effect.

Missing the timing: If "Water Dragon" is destroyed by an effect in the middle of a chain, you will miss the timing and cannot Special Summon the 3 monsters from your Graveyard.

While "Water Dragon" is face-up on the field, either player can activate an effect to increase the ATK of a FIRE or Pyro-Type monster, but the Continuous Effect of "Water Dragon" will change it back to 0.

Bonding - H2O: You can use "Bonding - H2O" to Special Summon a "Water Dragon" from your Graveyard, even if it was not properly Summoned previously.