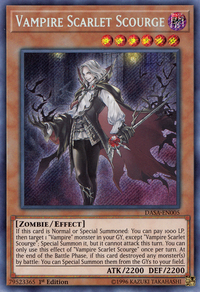 This monster appears in the card artwork of Vampire's Desire. This card's appearance is distinctively similar to that of Alucard, one of the central characters in the Castlevania video game series, from where Vampires take inspiration from. It is also similar in appearance to Soma Cruz, the reincarnated Dracula from the same series. This card's last effect is an exact copy of the much earlier released Vampire Baby.