10Cannot be Normal Summoned/Set. Must be Special Summoned (from your hand) by sending 3 face-up Trap Cards you control to the Graveyard, and cannot be Special Summoned by other ways. This card gains 1000 ATK for each Continuous Trap Card in your Graveyard. Once per turn: You can target 1 Set Spell/Trap Card your opponent controls; destroy that target. Neither player can activate Spell/Trap Cards in response to this effect's activation./
CARD ID: 06007213
STATUS TCG: Unlimited
Powered by yugioh.wikia.com 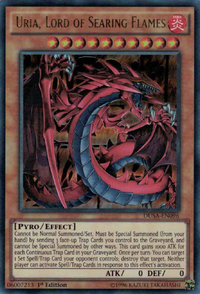 This card appears in the artwork of Phantasmal Martyrs, Phantom of Chaos, Hyper Blaze and Sacred Beast Awakening. Uria, Lord of Searing Flames is the Sacred Beast counterpart of Slifer the Sky Dragon, noted by its red color, serpentine body, sharp, pointed facial features and second mouth, in addition to their similar ATK-increasing effects. However, while Slifer is the Egyptian God entity of lightning, Uria is the Sacred Beast's entity of fire. This card shares an evil version with Slifer the Sky Dragon called The Wicked Eraser. The Sacred Beasts are named after angels in Judeo-Christianity; Urias name is an alternate spelling of the name of Uriah, which means the Lord is my light. This is the only one of the Sacred Beasts (excluding their fusion, Armityle the Chaos Phantom) not to have 4000 original ATK and DEF. Until the introduction of Subterror Behemoth Ultramafus, this card had the highest Level of all Pyro-Type monsters. It still has the second highest level of all Pyro-type monsters and has the highest level of all FIRE attributed Pyro-type monsters.

You can send "Embodiment of Apophis" to the Graveyard even while it is a monster, because it is still a Continuous Trap Card.

The effect of "Uria, Lord of Searing Flames" that increases his ATK is a Continuous Effect. His effect that destroys Spell & Trap Cards is an Ignition Effect.

When a player Special Summons "Uria, Lord of Searing Flames" and activates its effect to destroy a Set Spell or Trap Card, no Spell or Trap Card can be chained, including "Bottomless Trap Hole", "Torrential Tribute", or "Divine Wrath".