4Discard 1 card from your hand and declare 1 Type of monster. Destroy all face-up monsters of the declared Type on the field.1600/1000
CARD ID: 33184167
STATUS TCG: Unlimited
Powered by yugioh.wikia.com 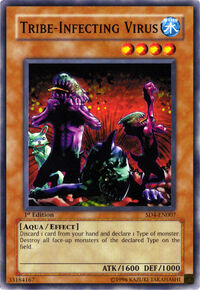 The lizard-like creatures infected by the virus appear in the artwork of Tour Bus To Forbidden Realms and Shared Ride. This card doesn't show the virus itself, but the affected monsters. Yu-Gi-Oh! Nightmare Troubadour and later video games show the virus as an orange swirling circle of haze. Tribe-Shocking Virus is a watered-down counterpart of this card. Archnemeses Eschatos is an upgraded counterpart of this card. In Sangan's , the creatures in this card's artwork thought him to be cute, and playfully teased him.

You declare the Type when you activate the effect and discard for the cost, not when the effect resolves, so your opponent can chain after you have announced which Type will be destroyed.

You can use this effect repeatedly as long as you can keep paying the cost.

Dark World: These effects only activate if the cards are discarded by a card effect. They will not activate if discarded for the cost of a card like “Tribe-Infecting Virus”

Lone Wolf: Your "Monk Fighter" targeted by "Lone Wolf" cannot be destroyed by the effect of "Tribe-Infecting Virus". Furthermore, if it is the only monster on your side of the field, your opponent cannot discard cards to activate "Tribe-Infecting Virus" to destroy Rock-Type monsters, because it will have no effect.