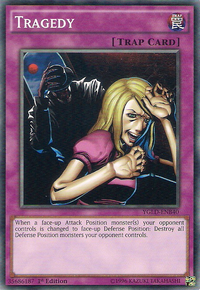 This card’s effect and OCG artwork are all symbolic of decapitation, as a monster being executed via guillotine would be defenseless, hence the effect requiring a monster to switch from Attack to Defense Position. The TCG artwork is a reference to the old “don’t kill the messenger” mantra. If looking closely at the girl’s right arm in the artwork, you’ll see that the proportions are off and anatomically incorrect.

Shield Worm: Changing this card to Defense Position and sending cards to your opponent's Graveyard are both parts of the same Trigger Effect. They occur one after the other, so you would miss the timing to activate "Tragedy."

You cannot activate "Tragedy" during the Damage Step.

You can activate "Tragedy" after an Attack Position monster is changed to Defense Position by a card effect, such as "Enemy Controller" or "Stumbling".

Missing the timing: The position change must be the last thing to have happened. If “Zero Gravity” was activated as Chain Link 2 or higher, you would not be able to activate “Tragedy”.