Cyberse / Link / Effect 2+ Effect Monsters
If a monster(s) is Special Summoned to a zone this card points to: Banish as many of those monster(s) as possible, also as many Spells/Traps on the field as possible, and if you do, inflict 500 damage to your opponent for each of their cards banished by this effect.ATK/2500 [LINK-3]
CARD ID: 72529749
Powered by yugioh.wikia.com 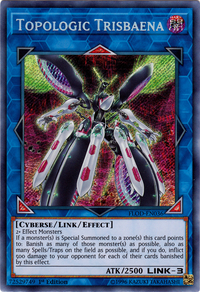 This monster is the cover card of Flames of Destruction. This card's name might be a portmanteau of torus and amphisbaena. In topology, a ring torus is homeomorphic to the product of two circles, while in mythology, an amphisabaena is an ant-eating serpent with two heads. Also in topology and knot theory, a branch of mathematics, the trefoil knot is the simplest example of a nontrivial knot. This is referenced by the shape of this monster's pelvic area in the Yu-Gi-Oh! VRAINS anime. This monster's body exhibits trilateral symmetry, perhaps referencing its status as a Link-3 monster. Just as Overburst Dragon has the same number and position of Link Arrows as Proxy Dragon, this card mirrors Decode Talker as being a Link-3 DARK Link Monster that requires 2+ Effect Monsters to be Link Summoned. This card has the following distinctions from the other Topologic monsters: It is the only member whose Link Rating is not 4. It is the only member whose ATK is not 3000. In the Yu-Gi-Oh! VRAINS anime, it is the only member Varis obtained from a Data Storm via Storm Access to occur in a Speed Duel against someone other than Playmaker (in this case, Ghost Gal).