101 Tuner + 1+ non-Tuner monsters
Cannot be destroyed by battle or card effects. You take no battle damage from attacks involving this card. At the end of the Damage Step, if this card that was Special Summoned from the Extra Deck battled: You can activate this effect; banish all monsters your opponent controls, also, for the rest of this turn, halve the battle damage your opponent takes. Once per turn, during the End Phase, if this effect was activated this turn: Special Summon as many monsters as possible that you banished with this card's effect, to your opponent's field./
CARD ID: 67508932
STATUS TCG: Unlimited
Powered by yugioh.wikia.com 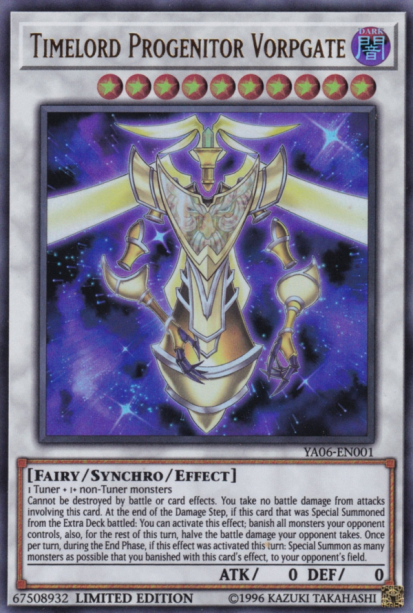 This monster resembles the Timelord monsters used by Z-one, the final antagonist of the Yu-Gi-Oh! 5D's anime. This mirrors a similar pattern with D/D/D Super Doom King Bright Armageddon, a monster used in the final battle by Declan Akaba of Yu-Gi-Oh! ARC-V anime, who resembles Z-one. Vulgate is the name of the Latin translation of the Bible used by the Roman Catholic church. Progenitor Vulgate can be read to mean 'originating from the Christian Bible' or 'from which the Christian Bible is based on'. Additionally, in it's appearance in the Manga, it is Synchro Summoned using three monsters named after the Three Wise Men, so it appears that this monster is based on Jesus Of Nazareth.This is the first DARK Timelord and the first Timelord Synchro Monster.Ironically, Z-one detested Synchro Monsters, due to their involvement in humanity's demise in his future. This card's artwork has been taken from , specifically the panel it has been summoned in.