2Once per turn: You can toss a coin and call it. If you call it right, destroy all monsters your opponent controls. If you call it wrong, destroy as many monsters you control as possible, and if you do, take damage equal to half the total ATK those destroyed monsters had while face-up on the field.500/400
CARD ID: 71625222
STATUS TCG: Unlimited
Powered by yugioh.wikia.com 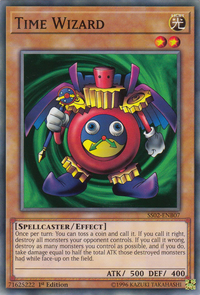 This card is one of the cover cards for Beginner's Edition 2 and Dark Beginning 2. This card appears in the TCG artwork of Exchange. This card’s positive effect is reminiscent of “Raigeki”. This was one of the first gamble cards ever printed in the TCG/OCG. This monster's silhouette appears in the artwork of Time Magic Hammer, reflecting the fact that in the anime, it was formed when Joey Wheeler fused this monster with The Claw of Hermos. This fact is also reflected in the Attribute, Level, Type, ATK, and DEF of Time Magic Hammer, which are the same as this card's. The Bandai version of this card is a Spell Card like its manga counterpart, whereas the Konami version is an Effect Monster, and while it retained the appearance of the latter, was played as a Spell Card in the anime. Coincidentally, this is reminicent of Pendulum Monster mechanics, which were introduced four series later. In Yu-Gi-Oh! Dark Duel Stories, this card is given the effect to directly transform Baby Dragon into Thousand Dragon without a Fusion Summon, just like in the anime. In its original manga artwork and the Bandai game, this monster lacked a physical clock face; its face consisted of two disembodied eyes and clock hands floating inside a ring. Its cape was visible through the hole, which likely became the inspiration for this monster's half-blue, half-yellow face. It is unclear if this monster's altered design in the anime and Konami card game was due to an artistic choice or a misinterpretation.

The effect of "Time Wizard" is an Ignition Effect, and therefore can only be activated during your Main Phase 1 or 2.