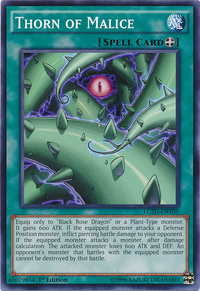 This card's artwork is similar to that of Closed Forest. Incidentally, in the Yu-Gi-Oh! 5D's anime, both cards are used by Signers (this card by Akiza Izinski and Closed Forest by Devack, who is a Dark Signer).  Moreover coincidentally, both cards' artworks possess antipodal color schemes in respect to both types of Signers, with this card's having mostly lighter colors, whereas Closed Forests has mostly darker colors. This card, like Black Rose Dragon, references the personality of Akiza Izinski. This card represents the pain she felt from her past and how she wished to take it out on others. This card shares similarities with Double Tool C&D in that it can only be equipped to either a specific Signer Dragon or a certain Type of monster. In this case, Black Rose Dragon or Plant monsters.

“Thorn of Malice’s” effect that reduces a monster’s ATK & DEF starts a Chain.

The effect of "Thorn of Malice" which reduces the ATK/DEF of the monster attacked by the equipped monster activates after Damage Calculation and starts a Chain.