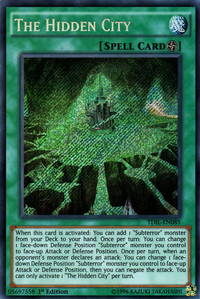 This card is based on Shambhala. Shambhala, which is a Sanskrit word meaning “place of peace” or “place of silence”, is a mythical paradise spoken of in ancient texts, including the Kalachakra Tantra and the ancient scriptures of the Zhang Zhung culture which predated Tibetan Buddhism in western Tibet. According to legend, it is a land where only the pure of heart can live, a place where love and wisdom reigns and where people are immune to suffering, want or old age. Shambhala is said to be the land of a thousand names. It has been called the Forbidden Land, the Land of White Waters, Land of Radiant Spirits, Land of Living Fire, Land of the Living Gods and Land of Wonders. The Hindus call it Aryavartha (‘The Land of the Worthy Ones); the Chinese know it as Hsi Tien, the Western Paradise of Hsi Wang Mu; and to the Russian Old Believers, it is known as Belovoyde.  But throughout Asia, it is best known by its Sanskrit name, Shambhala, Shamballa, or Shangri-la. The legend of Shambhala is said to date back thousands of years, and reference to the mythical land can be found in various ancient texts. The Bön scriptures speak of a closely related land called Olmolungring. Hindu texts such as Vishnu Purana mention Shambhala as the birth place of Kalki, the final incarnation of Vishnu who will usher in a new Golden Age. The Buddhist myth of Shambhala is an adaptation of the earlier Hindu myth. However, the text in which Shambhala is first discussed extensively is the Kalachakra. Part of this card's Japanese name 「地中界」 (Chichūkai) is an homophone of 「地中海」, the Japanese name of the Mediterranean Sea, with the kanji for world replacing the one for sea. This ties into the the Japanese names of the Subterror Behemoths being wordplays on parts and places of the latter.