The Eye of Timaeus

Normal / Spell(This card is also always treated as "Legendary Dragon Timaeus".)
Target 1 "Dark Magician" monster you control; Fusion Summon 1 Fusion Monster from your Extra Deck that lists that monster on the field as Fusion Material, using it as the Fusion Material. You can only activate 1 "The Eye of Timaeus" per turn.
CARD ID: 01784686
Powered by yugioh.wikia.com 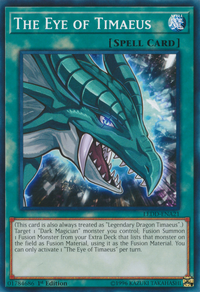 The three Legendary Dragons are named after Plato's Dialogues, from which we have many of our myths pertaining to the lost city of Atlantis. In the anime, this card has the fewest associated Fusion Monsters of the Legendary Dragons, having only 2 associated Fusion Monsters (Dark Magician Girl the Dragon Knight and Amulet Dragon). Yami Yugi also tried to fuse it with Poison Butterfly, but failed to because he had previously used The Seal of Orichalcos in his Duel against Rafael. This card and The Claw of Hermos both have an associated Fusion Monster that appears in more than one episode, those being Dark Magician Girl The Dragon Knight and Red-Eyes Black Dragon Sword respectively. Since this card's effect is used to Special Summon a Fusion Monster using only one monster, Fusion Summoning a monster with this card's effect is similar to a Transformation Summon. This is the only Legendary Dragon card whose OCG/TCG effect can be used to Special Summon a Fusion Monster that doesn't specifically require a Legendary Dragon to Fusion Summon it. This card's OCG/TCG artwork appears to be based on the appearance of Timaeus in the artwork of Legend of Heart.