Temple of the Six 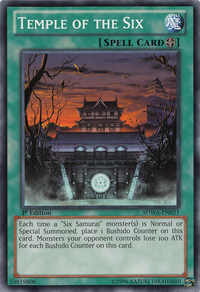 This card is a Six Samurai version of Burden of the Mighty. This card can also be seen as a Six Samurai counterpart to Realm of Light, seeing as how both cards involve Counters accumulating when an action occurs, and both have monsters' ATK increase/decrease by 100 per Counter.  Both cards' artworks also appear to depict the homelands of each respective archetype that they support. This is the second Field Spell to support The Six Samurai. Interestingly enough, both work to decrease the ATK of the opponent's monsters, instead of increasing the ATK of your own as most Field Spells do. Gateway of the Six and Shien's Castle of Mist appear in this card's artwork. Despite this card seemingly being a different building/location, this card's artwork is actually the front view of Shien's Dojo. This card appears on the cover for Samurai Warlords Structure Deck.

Placing the Bushido Counter does not start a Chain.

You still place a Bushido Counter when a “Six Samurai” monster is Special Summoned during the Damage Step.

You still place a Bushido Counter even if your opponent Summons a “Six Samurai” monster.

If "Temple of the Six" is negated by "Spell Canceller" or "Imperial Order", all Bushido Counters on it are removed.