4While this card is face-up on the field, it cannot be Tributed. If this card is Normal or Flip Summoned: Change this card to Defense Position. Once per turn: You can discard 1 Spell; Special Summon 1 Level 4 monster from your Deck, but that monster cannot attack this turn.800/1600
CARD ID: 00423585
Powered by yugioh.wikia.com 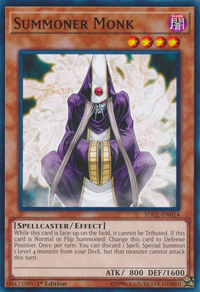 Discarding one Spell Card is a Cost to activate the effect which Special Summons a monster from your Deck.

If a monster like "Dark Ruler Ha Des" or "Revived King Ha Des" destroys a monster by battle, then the monster's effects are no longer negated if the monster leaves the Graveyard. Thus, if "Summoner Monk" is destroyed by battle with "Dark Ruler Ha Des" and is then Special Summoned from the Graveyard, then its effects are no longer negated, so it may Special Summon a Level 4 monster from the Deck.