Counter / TrapWhen a Spell/Trap Card, or monster effect, is activated: Send 1 face-up "tellarknight" monster you control to the Graveyard; negate the activation, and if you do, destroy that card, then draw 1 card.
CARD ID: 41510920
Powered by yugioh.wikia.com 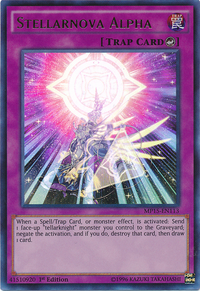 This card cannot be activated if you don't have any card in your Deck.

Sending 1 face-up "tellarknight" monster from your Monster Zone to the Graveyard is a cost to activate this card.

"negate the activation, and if you do, destroy that card" and "draw 1 card." are not considered to happen simultaneously.

This card cannot be chained to the activation of the effect of a Spell/Trap Card.

If "Airknight Parshath" destroys "Satellarknight Altair" by battle, and its "When this card inflicts battle damage to your opponent: Draw 1 card." effect is activated, "Stellarnova Alpha" cannot be activated by sending that "Satellarknight Altair" that was destroyed by battle to the Graveyard. (If you control another "tellarknight" monster, you can send that monster to the Graveyard to activate "Stellarnova Alpha".)