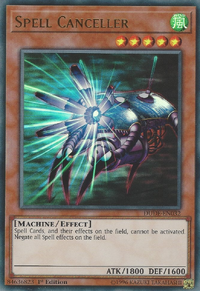 This card has a Trap-negating counterpart, Jinzo.

Mermaid Archer: If “Imperial Order” or “Spell Canceller” are active, “Mermaid Archer” still gains the 800 ATK from a monster equipped to it.

You can chain "Call of the Haunted" to a Spell Card, and Special Summon "Spell Canceller", to negate the effect of the Spell Card.

You can activate "Spiritualism" when "Spell Canceller" is face-up on the field because its activation and effect cannot be negated.

Destiny HERO - Diamond Dude:" The Normal Spell Card's effect activates in the Graveyard. So its effect will not be negated by "Spell Canceller".

Return of the Doomed:" This card is activated during your Main Phase 1 or 2 and creates a state that lasts until the end of your turn. If "Spell Canceller" is Summoned after this card was activated, but during the same turn, the state it created is not negated and 1 monster will return to your hand if destroyed during this turn.