Equip / SpellActivate this card only if you control no monsters in your Main Monster Zone. The equipped monster cannot attack directly. It can make a second attack on monsters during each Battle Phase. If the equipped monster destroys a monster by its attack while you have 3 or more Spells in your GY: Draw 1 card. If this card is sent from the field to the GY by a card effect: You can target up to 3 “Sky Striker” cards in your GY, except “Sky Striker Mecharmory - Hercules Base”; shuffle them into the Deck.
CARD ID: 97616504
Powered by yugioh.wikia.com 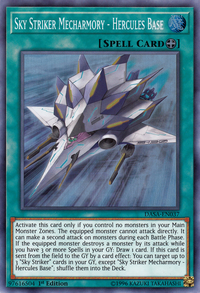 This card's serial number is S-130, carved within the left-wing part. The serial number S-130 may be a reference to the C-130 Hercules cargo plane, since this essentially serves as the cargo carrier for the various Sky Striker equipment This card appears in the artwork of Sky Striker Airspace - Area Zero, which depicts this card's on-radar location, behind the location of Sky Striker Ace - Kagari.