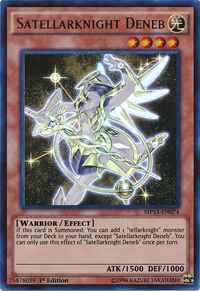 This card is named after Deneb which is the brightest star in the constellation Cygnus. The constellation Cygnus appears in the artwork of this card, with Deneb's location in said constellation denoted by an encircled star. Vega, Altair and Deneb are the three stars of the asterism known as the Summer Triangle, embodied by Stellarknight Delteros. Deneb wields the Caduceus, a staff of laurel or olive tree topped with two wings and surrounded with two interlaced snakes. This staff is used to cure snake bites. In the Greek mythology, it was carried by Hermes, but also represented alongside Iris, messenger of Hera. By linking the common points, Satellarknight Deneb might be perceived as an effigy of Iris. Indeed, Iris is considered as the goddess of Rainbow and messenger of the gods. She is represented under the figure of a graceful young girl, with brilliant wings of all the gathered colors. The combined colors of the rainbow is white, a symbol of purity. As Iris, Deneb is a young maiden, with graceful wings. They both wear the Caduceus, and the effect of Deneb can be perceived as that of a messenger too. The representation of the Swan constellation is an another sign of her purity, grace and loyalty. Another reason for why Deneb is represented by a bird is because in the story The Weaver Girl and the Cowherd, Deneb is the magpies that form the bridge that allow the lovers Vega and Altair to meet once every summer. Last but not least, the Caduceus was mentionned in the Irminsul, a sacred tree. In the Master Guide 5 card storylines, Satellarknight Deneb wields the staff’s power and evolved into Delteros, together with Altair and Vega, in order to protect the Naturia Sacred Tree. This scene is depicted in Stellarknight Alpha. A slightly different version of the Caduceus can be seen in Evilswarm Kerykeion.

"If this card is Summoned: You can add 1 "tellarknight" monster from your Deck to your hand, except "Satellarknight Deneb"." effect is an optional Trigger Effect. (This effect does not target. It can be activated during the Damage Step.)