Return of the Doomed

Normal / SpellDiscard 1 Monster Card from your hand to the Graveyard. Return 1 of your monsters destroyed and sent to your Graveyard as a result of battle during this turn to your hand at the end of this turn.
CARD ID: 19827717
Powered by yugioh.wikia.com 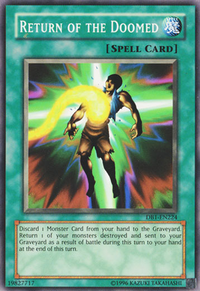 This card's image shows a different perspective of Silent Doom. The man in the picture is the same man from Card of Safe Return. This card, Crimson Sentry, The Forgiving Maiden and Lady Panther all have similar effects. Also, all three said cards along with this card, made their OCG and TCG debuts in the same Booster Packs (Spell of Mask and Labyrinth of Nightmare respectfully.) This card also has an improved version, Monster Reincarnation, which is also a Normal Spell Card with the same effect but a less specific cost and no other activation requirements.

While an effect like that of "Banisher of the Radiance" or "Macro Cosmos" is active, it is impossible to discard a card to the Graveyard. The activation costs of the effects of "Jowgen the Spiritualist", "Abyss Soldier" and "Return of the Doomed" require you to discard a card to the Graveyard, which is impossible, so you cannot activate their effects. However, the activation costs of effects like "Magic Jammer

This card is activated during your Main Phase 1 or 2 and creates a state that lasts until the end of your turn. If "Spell Canceller" is Summoned after this card was activated, but during the same turn, the state it created is not negated and 1 monster will return to your hand if destroyed during this turn.

If "Banisher of the Light" is on the field, a monster that is destroyed will be removed from play and cannot return to your hand since it never went to the Graveyard.

Trap Monster: When “Embodiment of Apophis” is sent to the Graveyard, it is sent as a Trap Card and remains treated as a Trap Card. You cannot retrieve it with “Return of the Doomed”.