6When this card is Tribute Summoned: You can pay 2000 Life Points to target 2 Fiend-Type monsters in your Graveyard; Special Summon those targets. They cannot attack this turn./
CARD ID: 41442341
STATUS TCG: Unlimited
Powered by yugioh.wikia.com 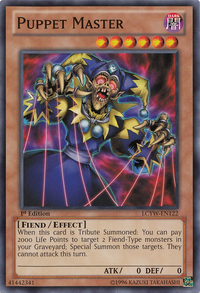 This card's OCG/TCG artwork is taken from , specifically from the panel where it Special Summons Headless Knight, Dark Necrofear and Gernia from Dark Bakura's Graveyard.

You cannot activate "Puppet Master's" effect if you don't have 2 or more Fiend-Type monsters in your Graveyard that you can Special Summon.