Normal / SpellFusion Summon 1 Machine Fusion Monster from your Extra Deck, using monsters from your hand or field as Fusion Material, and it gains ATK equal to its original ATK. During the End Phase of the turn this card is activated, you take damage equal to the amount of ATK gained from this effect at the time of the Summon.
CARD ID: 37630732
STATUS TCG: Unlimited
Powered by yugioh.wikia.com 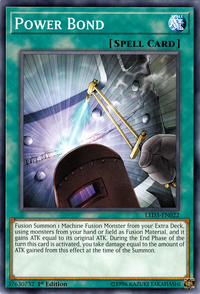 Power Bond is a signature card of Zane Truesdale and Syrus Truesdale. This card also symbolizes the bond between Truesdale brothers. The welding appears to be done using an Oxy-Acetylene torch (which is interesting as most people use them to cut metal instead of welding it). Though it's still used for welding thicker metal together. This card appears in the artworks of Banish Reactor and Three of a Kind.

You can still activate cards like "Polymerization" or "Power Bond" and Fusion Summon while the effect of "Macro Cosmos" is active and removing from play the Fusion Material Monsters instead of having them sent to the Graveyard. If "Polymerization" is activated while "Macro Cosmos" is active, then the Fusion Material Monsters to be sent to the Graveyard will be removed from play instead, and the Fusion Monster will still be Fusion Summoned from the Extra Deck

The ATK bonus for "Power Bond" lasts as long as the Fusion Monster is face-up on the field. If it is flipped face-down or removed from the field, the ATK increase disappears.

Even if the Fusion Monster is removed from the field or flipped face-down, you cannot negate the effect of "Power Bond" and the player will still take damage equal to the original ATK.

If you Fusion Summon "UFOroid Fighter" with 3000 ATK, and then later in the turn "Skill Drain" is activated, reducing its ATK to 0, you will still take 3000 points of damage during the End Phase. If you send "UFOroid Fighter" to the Graveyard so that its effect resets and its original ATK becomes zero, you still take damage equal to its original ATK at the time it was Special Summoned by "Power Bond".

You can prevent the damage from "Power Bond" with "Des Wombat".

If you equip the monster Special Summoned by "Power Bond" with "Megamorph", the ATK gained from "Power Bond" disappears but the damage is still inflicted in the End Phase.

Chthonian Polymer: You can only activate this card when the opponent Fusion Summons a monster, including with a Special Summon that is treated as a Fusion Summon, like "Miracle Fusion" or "Power Bond". You cannot activate it when they Special Summon a Fusion Monster with a card effect, like "Metamorphosis" or "Cyber-Stein".

Fusion Recovery: You can use "Fusion Recovery" to retrieve a Fusion Material Monster that was used with "Power Bond" or "Fusion Gate" or "Polymerization".

If "Non-Spellcasting Area" is active and "Power Bond" is used to Special Summon a Fusion Monster that has no effect, the Fusion Monster will not gain the ATK bonus from "Power Bond", but the controller will still take damage for "Power Bond" (because the player is not a non-Effect Monster Card).