4When this card is Normal or Flip Summoned: You can Special Summon any number of "Skyblaster Tokens" (Fiend/DARK/Level 4/ATK 500/DEF 500), up to the number of monsters you control. Once per turn, during your Standby Phase: You can inflict 300 damage to your opponent for each "Skyblaster" monster you control. "Skyblaster" monsters you control cannot declare an attack during the turn you activate this effect.1100/800
CARD ID: 12958919
STATUS TCG: Limited
Powered by yugioh.wikia.com 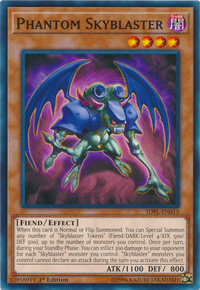 This card is similar to Raviel, Lord of Phantasms in both appearances and token summoning ability. (which fits well since when Jesse Anderson possessed by Yubel used Phantom Skyblaster and two Skyblaster Tokens as the sacrifices to summon Raviel.)

When you activate "Phantom Skyblaster's" effect, you must Special Summon at least 1 "Skyblaster Token", if able.

"Phantom Skyblaster's" effect disappears if you do not have any monsters on your side of the field when its effect resolves.