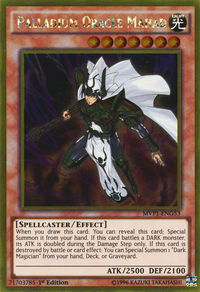 This monster is based on Mahad, one of the Sacred Guardians. Just as this monster is based on Mahad, Maiden with Eyes of Blue is based on Kisara, the carrier of Blue-Eyes White Dragon. Similarly, both cards are able to Summon their respective monster from the hand, Deck, or Graveyard. This monster's effect of Special Summoning Dark Magician after being destroyed is a reference to Mahad becoming said monster after his death in the anime and manga. Fittingly, this card has the same Type, ATK, DEF and Level as Dark Magician. Palladium in this card's name is a word used figuratively to mean anything believed to provide protection or safety. In this case, it could possibly refer to Mahad, himself, and his willingness to sacrifice his own life in order to ensure the safety of Atem. Just as how Dark Magician opposes Blue-Eyes White Dragon, this card can be considered a rival to Blue-Eyes Chaos MAX Dragon. Both are counterparts to the original card, have opposing Attributes and stances in their artworks, appear in Yu-Gi-Oh! The Dark Side of Dimensions, and act as the final trump cards to Yugi Mutou and Seto Kaiba respectively. The needle-like jewelry on this monster's belt look like the pointers found on the Millennium Ring, possibly as a reference to Mahad being the user of the ring while he was alive.