93 Level 9 monsters
Once per turn: You can detach 1 Xyz Material from this card; until the end of this turn, negate the effects of all other face-up cards currently on the field, also your opponent cannot activate cards or effects on the field. If this card has "Number 107: Galaxy-Eyes Tachyon Dragon" as an Xyz Material, it gains this effect.
● You can Tribute 2 monsters; this card can make up to 3 attacks on monsters during each Battle Phase this turn.4500/3000
CARD ID: 68396121
STATUS TCG: Unlimited
Powered by yugioh.wikia.com 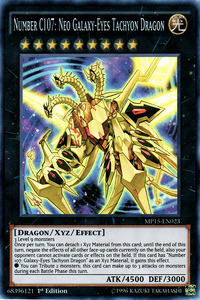 This is the first Number C Summoned by Rank-Up-Magic Barian's Force. This is the first monster Summoned by Barian's Force that does not belong to the CXyz archetype. Ironically, out of all Number C, this one has gone the longest without having its effects revealed. It was first summoned in Episode 83 and its effect was not used until Episode 128. This monster's initial appearance in the anime bears a resemblance to the phoenix mode of The Winged Dragon of Ra. Just as Number 107: Galaxy-Eyes Tachyon Dragon is very similar to Galaxy-Eyes Photon Dragon & Galaxy-Eyes Cipher Dragon, this card shares many similarities with Neo Galaxy-Eyes Photon Dragon & Neo Galaxy-Eyes Cipher Dragon. All have three heads All have Neo in addition to their lower form's name Just as Neo Galaxy-Eyes Photon Dragon could be a reference to Blue-Eyes Ultimate Dragon, this card could be a reference to Cyber End Dragon. Both Cyber End Dragon and this card are machine-like, but this card is a Dragon instead of a Machine. Both are triple-headed dragons. Both are used by Duelists who use Dragon Decks. Similar to how Galaxy-Eyes Tachyon Dragon is able to negate card effects and control time to its own advantage during the Battle Phase, this card's own effect negates the effects of all other cards and resets the entire state of the Duel to that of the beginning of the turn and then averts the occurrence of any unfavorable outcomes during the Main Phase. It also can potentially prevent your opponent from activating other cards due to its second effect. Like Number C39: Utopia Ray and Number C32: Shark Drake Veiss, Neo Galaxy-Eyes Tachyon Dragon's colors are reversed compared to his base form. Tachyon Dragon is dark-purple, Neo Tachyon Dragon is light-yellow. This card appears in the artworks of Neutrino Dowsing, Tachyon Chaos Hole and Chaos Hundred Universe. This monster has the highest ATK of any Number C monster so far. On that note, it has the highest ATK jump from its original form, as the difference is 1500 ATK from Number 107: Galaxy-Eyes Tachyon Dragon. This card is the first Dragon Number C monster. This card and Neo Galaxy-Eyes Photon Dragon both activate their effects during the Main Phase, unlike their original counterparts which activate their effects during the Battle Phase. When this card first activated its Rank-Up effect in Episode 128, the music was played in reverse. This references the fact that through its effect, this card can reverse time. A tachyon is a hypothetical particle described in quantum physics to be capable of traveling over light speed, resulting in time travel. This card shares similarities with Thunder King, the Lightningstrike Kaiju. Both bare a resemblance to  King Ghidorah from Godzilla. Both have an effect that prevents the opponent from activating cards or effects for the rest of the turn, and an effect that enables them to attack monsters up to 3 times in one turn. This card and Number C39: Utopia Ray V are so far the only card to belong to ten supported archetypes: C, Number, Number C, Number 10X, Number C10X, Galaxy, Galaxy-Eyes, Tachyon, Tachyon Dragon and Galaxy-Eyes Tachyon Dragon. Although Number C, Number 10X, Number C10X, Galaxy-Eyes, Tachyon Dragon and Galaxy-Eyes Tachyon Dragon are sub-archetypes of Chaos, Number, Number C, Number 10X, Galaxy, Galaxy-Eyes, Tachyon and Tachyon Dragon respectively, they have specific support. There is an error on the Italian translation of this card. It was called Numero C107: Drago Galattico Occhi Tachionici whic means Number C107: Tachyon-Eyes Galaxy Dragon. In addition to reverse Galaxy with Tachyon, in the translation there isn't the word Neo.

The "●" effect is an Ignition Effect. (Tributing 2 monsters you control is a cost to activate this effect. You can also Tribute face-down monsters.)