93 Level 9 monsters
You can also Xyz Summon this card by using a "Galaxy-Eyes" Xyz Monster you control as the Xyz Material. (Xyz Materials attached to that monster also become Xyz Materials on this card.) Cannot be used as an Xyz Material for an Xyz Summon. When this card is Xyz Summoned: You can send 3 Dragon-Type monsters with different names from your Deck to the Graveyard; your opponent banishes 3 monsters from their Deck. You can detach 1 Xyz Material from this card; this card can make up to 2 attacks on monsters during each Battle Phase this turn.4000/
CARD ID: 58820923
STATUS TCG: Forbidden
Powered by yugioh.wikia.com 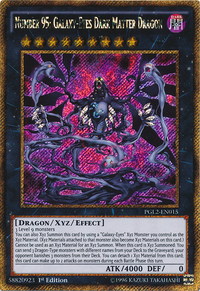 This is the first Galaxy-Eyes monster used by Kaito Tenjo that is not part of the Photon archetype and is DARK. In cosmology, dark matter is the term used to describe a phenomena in outer space where the effects of matter can be measured, but when no matter can be seen. Dark matter is unique in that it neither absorbs nor reflects light, and as such its properties can only be measured by its gravitational effects on visible matter. It is also hypothesized that approximately 95% of the Universe is made of dark matter. This card has the same Summoning condition as Galaxy-Eyes Full Armor Photon Dragon in the OCG/TCG. Both cards have been use by Kaito Tenjo in the Yu-Gi-Oh! ZEXAL manga. This card and Galaxy-Eyes Full Armor Photon Dragon are the only Galaxy-Eyes monsters whose Japanese name is written without kanji. This card's OCG/TCG artwork is taken from , specifically from the panel showing this monster being Summoned. This monster's pose is made vertical, however. This artwork also displays the same souls brought forth by Soul Arena during its Summon in the manga. This is the first “Galaxy” monster and the fourth Number monster to be Forbidden on the TCG Banlist.