82 Level 8 monsters
Once per Battle Phase, at the start of your Battle Phase: You can detach 1 material from this card; all other face-up monsters currently on the field have their effects negated, also their ATK and DEF become their original ATK and DEF, and if you do any of these, during the Battle Phase this turn, each time an opponent's card effect resolves, this card gains 1000 ATK until the end of the Battle Phase, also, it can make a second attack during each Battle Phase this turn.3000/2500
CARD ID: 88177324
STATUS TCG: Unlimited
Powered by yugioh.wikia.com 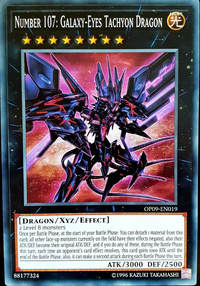 This monster is the cover card for Lord of the Tachyon Galaxy. This card's sealed form is a black upside-down pyramid with a formation on top of the square. and blue and red panels on opposite triangle sides. This was the first triple-digit Number, or Over-Hundred Number, revealed. This card is the only base Over-Hundred Number monster whose Rank is not 4. The number '107' can be seen on the right side of its head.   A tachyon is a hypothetical particle that always moves faster than light, which might symbolize how it is considered stronger effect-wise than its rival, Galaxy-Eyes Photon Dragon. It is theorized that said particle can travel backwards and forward through what is perceived as time. Furthermore, Astral makes a reference to this while describing its effect; it can travel backwards in time and reset the situation to its advantage. This card is the rival counterpart to Galaxy-Eyes Photon Dragon. This card has the same Attribute, ATK, DEF and Type; its Rank is also the same as the Level of Galaxy-Eyes Photon Dragon. Galaxy-Eyes Photon Dragon resides in Astral World (according to Astral, it has light dwelling within it similar to his own world, likely because of its true form harnessing power from Astral World), while this card exists in the rival dimension, Barian World. Like its rival, this dragon's true birthplace is the moon; it is also the Dragon of Time referred to in the Legend of the Dragons of Light and Time. Barian World appears to be in this card's background. This monster's roar in the anime is similar to how Galaxy-Eyes Photon Dragon roars in the Japanese version. When this card uses its effect, it temporarily reverts to its sealed form. Then, if another Number has its effect negated, that monster reverts to its sealed form for as long as its effect remains negated. This monster resembles an Orbital Frame from Hideo Kojima's Zone of the Enders franchise, also owned by Konami. This monster appears in the artworks of Tachyon Drive, Tachyon Flare Wing, Neutrino Dowsing, Hundred Summon and Tachyon Spiral Galaxy. Its sealed form appears in the artwork of Tachyon Transmigration. There is an error on the Italian translation of this card. It was called Numero 107: Drago Galattico Occhi Tachionici which means Number 107: Tachyon-Eyes Galaxy Dragon. Ironically, being called Galaxy-Eyes, this monster doesn't have a galaxy in its eyes.

Detaching 1 Xyz Material is a cost.

Even if the opponent activates an effect during the Damage Step, the ATK of this card is increased.

This card is treated as a "Galaxy" monster.

The effect of "Number 107: Galaxy-Eyes Tachyon Dragon" that negates the effects of all other face-up monsters and returns their ATK and DEF to their original values is applied as long as the affected monsters remain face-up on the field.