Normal / SpellTarget 1 face-down monster on the field; destroy that target, and if you do, banish it, then, if it was a Flip monster, each player reveals their Main Deck, then banishes all cards from it with that monster's name.
CARD ID: 71044499
Powered by yugioh.wikia.com 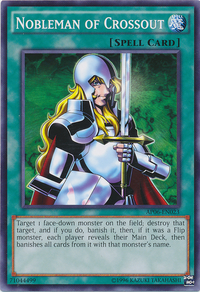 This card has a Trap removal counterpart: Nobleman of Extermination. The warrior from this card also appears in Crossout Designator When you look closely at the background of this card's artwork, you can see an area that looks similar to Europe. This card's position on the Forbidden/Limited List has changed eight times, more often than any other card.

Voltic Bicorn: If "Voltic Bicorn" is destroyed while face-down, such as with "Nobleman of Crossout", its effect will activate.

The targeted monster, and any cards of the same name if the target was a Flip Effect Monster, are removed from play and never go to the Graveyard, so the effects of cards like "Sangan" will not activate.

Cards of the same name in your hand or on the field are NOT removed from play.

D.D. Scout Plane:" if "D.D. Scout Plane" was face-down on the field, and was removed by "Nobleman of Crossout", it is placed face-up while out of play and its effect does activate.

Dramatic Rescue:" You cannot activate "Dramatic Rescue" when your face-down Amazoness is targeted (with "Nobleman of Crossout", etc.).