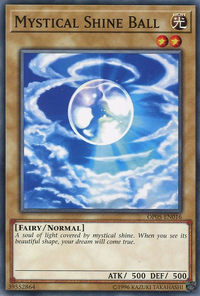 3 different-colored copies of this monster (blue, red and purple) appear in the artwork of The Agent of Creation - Venus. This card appears to have a connection with Archlord Zerato who is based on Archangel Zerachel, an angel known in religion for carrying souls into the great beyond. According to Zerato's effect he can destroy all monsters by sacrificing a light monster and Cards from the Sky shows this card reflecting the sun while two feathers are falling from The Sanctuary in the Sky which may imply that Mystical Shine Ball is actually Zera's ascended soul.

The Agent of Creation - Venus: You have to shuffle your Deck after searching for the "Mystical Shine Ball".