Mound of the Bound Creator

Field / SpellLevel 10 or higher monsters on the field cannot be targeted or destroyed by card effects. If a Level 10 or higher monster on the field destroys a monster by battle and sends it to the Graveyard: The player who controlled the destroyed monster takes 1000 damage. When this card on the field is destroyed by a card effect and sent to the Graveyard: You can add 1 DIVINE monster from your Deck to your hand.
CARD ID: 00269012
STATUS TCG: Unlimited
Powered by yugioh.wikia.com 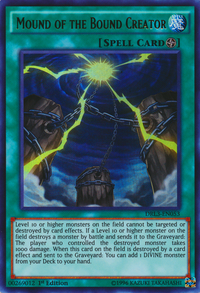 This is the first TCG/OCG card to support the DIVINE Attribute.The three statues in this artwork likely reference that this card supports Divine-Beast-Type monsters, especially given that you add a DIVINE monster from your Deck to your hand and need 3 Tributes for their Tribute Summon.The word god(s) in the Japanese version likely refers to the DIVINE Attribute or the Divine-Beast Type rather than some sort of Creator, which was used as a religion-friendlier alternative. It was translated rather faithfully in French as Dieu (God).