Dragon / Link / Effect 2 "Rokket" monsters
If you control a “Borrel” Link Monster while this card is in your GY: You can Tribute 1 Link-3 or lower monster; Special Summon this card, but it cannot be used as material for the Link Summon of a monster with the same Link Rating as the Tributed monster. You can only use this effect of “Miniborrel Dragon” once per turn.ATK/800 [LINK-2]
CARD ID: 73341839
Powered by yugioh.wikia.com 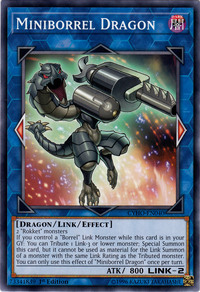 The appearance of this monster is very similar to the members of the Gun Dragon series. Each of the Borrel Link Monsters' Link Arrow locations seem to be based on a junction of their names, appearances,  attacking methods or some combination of the three. In the case of this monster, its active Link Arrow locations seem to take after its odd non-centered appearance--as in respect to the center of its body, this monster's head elongates off to the Left and its weapon is off to the Right.