3Once per turn: You can target 1 face-up Level 3 or lower monster you control; equip that target to this card. (You can only equip 1 monster at a time to this card with this effect.) While equipped with a monster by this effect, this card gains 800 ATK. If this card would be destroyed, you can destroy the monster equipped to it with this effect instead.1200/200
CARD ID: 04252828
Powered by yugioh.wikia.com 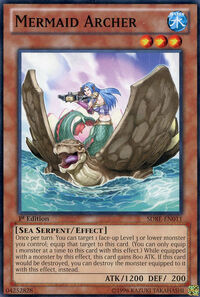 This card's effect simulates a reversal of a Union Monster's effect, which typically strengthens the equipped monster and prevents it from being destroyed by battle. However, this card does not receive the support that a Union Monster would be entitled to (such as Roll Out!). To snowball this, like Power Tool Dragon, this card has the reverse effect of Union monsters, in that it can destroy an equip card to prevent itself from being destroyed (Union Monsters destroy themselves to protect the equipped monster). This card is thematically similar to Red Archery Girl. This card and Mermail Abysstrite are the only mermaid-based monsters to be Sea Serpent-Type. All other mermaid-based monsters are either Fish or Aqua (unless you count Deep Sea Diva or Guardian Kay'est as a mermaid).

“Mermaid Archer’s” effect to equip itself targets the Level 3 or lower monster you control.

If “Imperial Order” or “Spell Canceller” are active, “Mermaid Archer” still gains the 800 ATK from a monster equipped to it.

If “Mermaid Archer” and the monster equipped to it would be destroyed at the same time (by “Judgment Dragon,” for example), you cannot destroy the equipped monster to save “Mermaid Archer.”

The effect which equips a Level 3 or lower monster you control to this card targets.