Mekk-Knight of the Morning Star 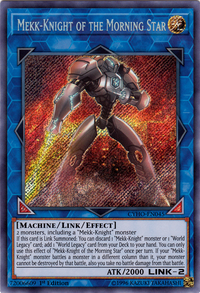 This monster's blueprint appears in the artwork of World Legacy's Memory, apparently being designed by the Crusadia members of the distant past (they appear as the scientists without their battle clothing). Just like Lucifer was an archangel meant to bring salvation, this monster in the end brought nothing but ruin. This card is the only Extra Deck member of the Mekk-Knight archetype to not be a Cyberse monster with 3000 ATK.