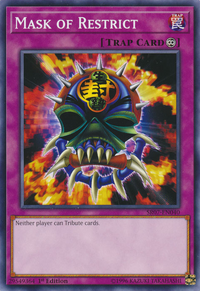 This is the cover card for Labyrinth of Nightmare. This is one of three cover cards that are not monsters; the other two are Last Turn (featured on Legacy of Darkness) and Deck Devastation Virus (featured on Flaming Eternity). This card has a somewhat weaker anime-only counterpart: Limit Tribute. The kanji 生贄封 on this mask in this card's artwork means sacrifice sealing.

Djinn of Rituals: You can remove this card from play during the resolution of a Ritual Spell even if “Mask of Restrict” is in play because it does not count as Tributing

Fusion Material Monsters are not Tributes, so a Fusion Monster may be Special Summoned while this card is active on the field.

If "Mask of Restrict" is chained to a Ritual Spell Card, the effect of the Spell Card cannot resolve and no monsters are Tributed from the hand or field.