3Cannot be destroyed by battle. After damage calculation, if this card was attacked, and was face-down at the start of the Damage Step: The attacking player takes 1000 damage.300/500
CARD ID: 31305911
Powered by yugioh.wikia.com 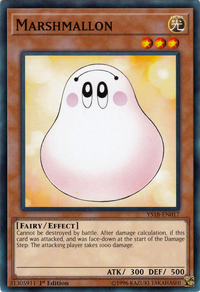 This card is a counterpart of Marshmacaron, with the same Attribute, Type and with a defensive effect. This monster appears in the artworks of Marshmallon Glasses, Card Rotator, Thousand Punisher and Double Check. In the artworks of Card Rotator and Double Check, when looking closely one can see this monster has a set of very sharp teeth (as revealed in the anime). This card is similar to White Potan in terms of appearance and effect.

If a Warrior-Type monster attacks, performs damage calculation, does not destroy the other monster, and afterwards the other monster is destroyed by a card effect, then the effect of "Sword Master" which Special Summons it can still be activated.
Example: If your Warrior-Type monster attacks an opponent's "Marshmallon", and "Divine Wrath" negates the activation of the damage-inflicting effect of "Marshmallon" and destroys "Marshmallon", then you can still Special Summon "Sword Master

“Barrel Behind the Door” can be chained to the effect of “Marshmallon” that inflicts damage.

The effect of “Marshmallon” that inflicts damage activates after damage calculation.

“Divine Wrath” can be chained to “Marshmallon's” damage inflicting effect.

When a monster equipped with “Ballista of Rampart Smashing” attacks a face-down, Defense Position “Marshmallon”, the effect of “Ballista of Rampart Smashing” that increases the ATK of the equipped monster is applied during damage calculation. After damage calculation, the effect of “Marshmallon” that inflicts damage is activated.