Continuous / TrapWhen your opponent's card(s) in their hand are discarded to the Graveyard, inflict 500 points of damage to their Life Points for each card that was discarded.
CARD ID: 53119267
Powered by yugioh.wikia.com 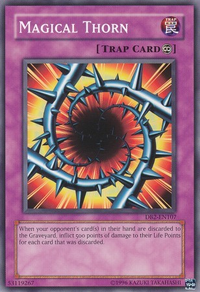 In a few video games, this card is named Magic Thorn.

If you play "Graceful Charity" and (after discarding) you have the 5 pieces of "Exodia", you win the duel before "Magical Thorn" inflicts damage.

Normally, for Normal Trap Cards and Counter Trap Cards, after they are activated and resolve they are destroyed and sent to the Graveyard. Continuous Trap Cards with the "Continuous" icon and Trap Cards like "Metalmorph" and "Blast with Chain" which equip themselves to monsters remain face-up on the field after activation.
The following cards from before Magic Ruler was released on April 20, 2000 do not have the "Continuous" icon, but during the Duel they are still treated as Continuous Trap Cards: "Ultimate Offering", "Royal Decree", "Magical Thorn", "Robbin' Goblin", "Dragon Capture Jar", and "Call of Darkness

The effect of "Magical Thorn" is applied when the opponent discards during the End Phase to make their hand size 6, discarding for the cost of cards such as "Tribute to the Doomed", "Cost Down", or "Judgment of Anubis", and discarding for card effects such as "Delinquent Duo", "Confiscation", "Robbin’ Goblin", "Morphing Jar" and "Mefist the Infernal General".

The effect of "Magical Thorn" is NOT applied when you send cards from your hand to the Graveyard for things such as a Tribute for a Ritual Spell Card, a Fusion Material Monster, or the effects of cards like "Chosen One" or "Gravekeeper’s Watcher".

Even though "Magical Thorn" does damage per card discarded, it deals the damage as one lump sum for effects like "Dark Room of Nightmare".

"Necrovalley" does not negate the effect of "Magical Thorn".