Continuous / TrapActivate only if the 1 and only monster on your side of the field is "Chu-Ske the Mouse Fighter", "Monk Fighter", or "Master Monk". That monster cannot be destroyed as a result of battle, and is unaffected by any of your opponent's monster effects.
CARD ID: 82452993
Powered by yugioh.wikia.com 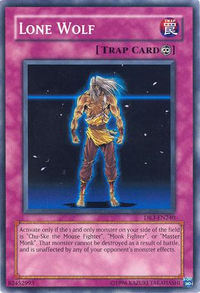 If you activate "Lone Wolf" targeting an appropriate monster, and later you Summon another monster, the effect of "Lone Wolf" is still applied.

If you Summon "Monk Fighter" and target it with "Lone Wolf", and your opponent controls "Big-Tusked Mammoth", you can still attack that same turn with "Monk Fighter".

If your opponent Summons "Dark Jeroid" and reduces your "Monk Fighter's" ATK by 800 points, then later you activate "Lone Wolf" targeting the "Monk Fighter", it does not restore the ATK of "Monk Fighter".

If you have "Monk Fighter" targeted by "Lone Wolf", the following are examples of monster effects that will NOT be negated because they are not applied to a monster: "Airknight Parshath" (damage is inflicted and a card is drawn), "Fiber Jar" ("Monk Fighter" is shuffled into the Deck), "Maju Garzett" (the ATK of "Maju Garzett" does not become 0), "Susa Soldier" (the damage to Life Points is still halved), "Dark Magician Girl" (her ATK is still increased by her effect), "Stone Statue of the Aztecs" (Battle Damage to your Life Points is doubled), "Amazoness Fighter" (opponent's Battle Damage to their Life Points is still zero), "Amazoness Swords Woman" (Battle Damage is still redirected), and "Reflect Bounder" (you still take Effect Damage to your Life Points).

The effect of "Lone Wolf" will be negated by "Jinzo" even if targeting "Monk Fighter".