Quick-Play / SpellDouble the ATK of all Machine monsters you currently control, until the end of this turn. During the End Phase of this turn, destroy those monsters.
CARD ID: 23171610
STATUS TCG: Unlimited
Powered by yugioh.wikia.com 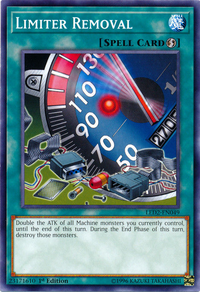 The text and effect of this card allude to overclocking, in which  the performance of a machine could be increased (usually computer hardware) at the risk of instability or outright hardware failure, reflected in its effect. The odometer on this cards artwork appears to be a broken version of Speed Spell - Acceleration Limiter. The odometer features the number 2705, possibly implying that the effect was used on a monster with 1350 ATK. Possible candidates are Kinetic Soldier and Disk Magician. Ironically, in spite of this card's name, this card is currently Semi-Limited in the Advanced Format. This card has the following relations to/with Sonic Boom: Both have an effect that doubles a Machine monster's ATK (albeit Sonic Boom is more specific with this) and destroys the affected monsters during the End Phase. Both card's artworks depicts references of high speed (this card's shows a maxed out speedometer and Sonic Boom shows a titular sonic boom, which is a loud sound associated with the distortion of air wrought by an object that travels at a speed that breaks the sound barrier). This card has the following counterparts: For Beasts: Wild Nature's Release (ATK equal to its DEF) For Plants: Raging Mad Plants (200 ATK for each Plant monster in your GY) For Psychics: ESP Amplifier (300 ATK for each banished Psychic monster)

Cosmic Compass:" If a "Compass Token" is affected by "Limiter Removal" it will be destroyed during the End Phase even if its ATK stayed at 0.

When this effect resolves, this effect is applied to all face-up Machine-Type monsters in your Monster Zone.

Applying "During the End Phase of this turn, destroy those monsters." does not start a Chain Link.

The total ATK of the monster is doubled, including any ATK increases/decreases from other effects.

Machine-Type monsters Summoned after "Limiter Removal" resolves are unaffected and are not destroyed during the End Phase.

If an affected monster is flipped face-down or becomes an Equip Card, it is not destroyed in the End Phase.

If a Machine-Type monster's ATK is doubled with "Limiter Removal" and afterwards its Monster Type is changed, it is still destroyed in the End Phase.

Book of Moon:" If you use "Book of Moon" on a monster that had its ATK doubled with "Limiter Removal", the monster is not destroyed at the end of the turn.

Shrink: If "Shrink" affects a monster whose ATK is doubled by "Limiter Removal", that monster's ATK will become half of its original (printed) ATK.