Field / SpellDuring your Standby Phase, toss a coin. If the result is Tails, the following effects are negated until your next Standby Phase:
● When you Summon an "Arcana Force" monster, choose which effect to apply without tossing a coin. If an "Arcana Force" monster destroys an opponent's monster by battle, you gain Life Points equal to the destroyed monster's original ATK.
CARD ID: 73206827
Powered by yugioh.wikia.com 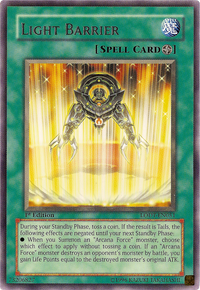 The monster featured on this card is Arcana Force XXI - The World. Light Barrier is in reference to the ultraviolet light barrier in Lovecraft's story From Beyond, in which Crawford Tillinghast constructs a machine which can illuminate the sixth sense in the human mind. (In From Beyond, however, this sixth sense is the ability to perceive ultraviolet, and things which fall in the ultraviolet spectrum are from another dimension. This translates into that which comes from another dimension being that which controls the flow of time and space on Earth, as is proven in the story by the fact that air itself does not occupy space, but is instead filled completely with constantly writhing deep-marine like creatures.) In Brian Yuzna's film adaptation of this story, Edward Pretorius (sounds like Sartorius) is able to will his own physical destiny, and also exhibits extraordinary telekinetic powers while the machine is operating. This card makes Arcana Force have the life gaining effect which Thought Ruler Archfiend and Guardian Angel Joan" have.

"Light Barrier's" effect to flip a coin during the Standby Phase starts a Chain.

The effect of the Summoned "Arcana Force" monster still starts a Chain, but you do not toss the coin. When the effect resolves you will select if the heads or tails effect is applied.

If an "Arcana Force" monster's effect is chosen in this way, it cannot be selected with "Reversal of Fate" or "Arcana Call".

"Light Barrier's" effect to gain Life Points starts a Chain when the opponent's monster is sent to the Graveyard or Removed Zone at the end of the Damage Step.

If your "Arcana Force" monster is also destroyed in the battle, "Light Barrier's" effect still activates.

Only the controller of "Light Barrier" activates its effects.