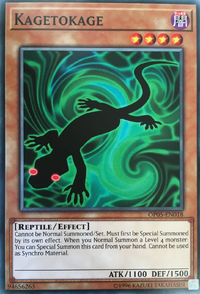 In the Viz manga adaptation, this card is sometimes referred to as Shadow Lizard, a translation of its name. This card's appearance (a shadow with glowing, red eyes) is based off its name, as indicated above. Also, this card's effect can be understood as Kagetokage acting as the shadow of another monster. It's likely that this card is based off of the flat lizards in Reptiles, by M. C. Escher.

This monster is a Special Summon monster.

"Cannot be Normal Summoned/Set." and "This card cannot be used as a Synchro Material Monster." are not treated as Effect Monster effects.

While "A Legendary Ocean" is applying, if you Normal Summon "Eagle Shark", you can activate the effect of "Kagetokage" in your hand.

Number S0: Utopic ZEXAL: The effect of "Number S0: Utopic ZEXAL" prevents your opponent from activating cards or effects for the rest of their turn. Continuous Effects will be applied normally, and your opponent can still Normal Summon monsters, as well as perform Special Summons, Synchro Summons, Xyz Summons, or Pendulum Summons. Special Summons that require the activation of a card or effect, such as "Rank-Up-Magic Barian's Force" or "Kagetokage", cannot be performed.