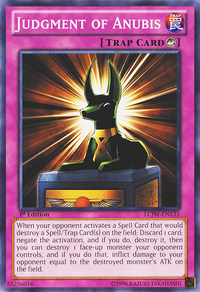 Anubis was the Egyptian god of embalming. The Anubis statue can also be seen in: Curse of Anubis and Temple of the Kings. There's another card with a similar name that also relates to Egypt called Judgment of Pharaoh. If you look carefully, on the right side of the tomb, you can see Egyptian hieroglyphics.

The effect does not target. You can activate "Judgment of Anubis" when your opponent controls no monsters.

If the effect of "Great Shogun Shien" is applied, when "Magic Jammer"/"Seven Tools of the Bandit"/etc negates the activation of a Spell/Trap Card, the opponent can activate one more Spell/Trap Card.

If your opponent activates "Magic Jammer" at Chain Link 2 while controlling "Bountiful Artemis", after resolving the chain, the last event to occur is the resolution of "Magic Jammer" and the drawing from "Bountiful Artemis". At this time, you can activate "Appropriate: After "Dark Bribe" resolves and the event is considered "drawing", can "Appropriate" be activated?

You can activate "Judgment of Anubis" when there are no monsters on your opponent's side of the field.

You can activate "Judgment of Anubis" and select a Spell Card that destroys only a Spell Card (like "De-Spell") or only a Trap Card (like "Remove Trap") or could destroy both (like "Mystical Space Typhoon") or many (like "Heavy Storm").

You can activate "Judgment of Anubis" and select a Spell Card that negates the activation of a card and destroys it, like "My Body as a Shield" or "Bait Doll".

Des Wombat: If your only "Des Wombat" is destroyed by "Judgment of Anubis"it is no longer on the field so it will not protect you against the damage from these card effects.

Magical Thorn: The effect of "Magical Thorn" is applied when the opponent discards during the End Phase to make their hand size 6, discarding for the cost of cards such as"Judgment of Anubis"