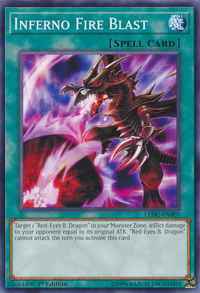 Red-Eyes Black Dragon appears in this card's artwork.This card can be thought of as a Red-Eyes counterpart to the Blue-Eyes archetype's Burst Stream of Destruction.

No copies of "Red-Eyes B. Dragon" can attack if you activate "Inferno Fire Blast".