1This card cannot be Special Summoned from the Graveyard. If you have no cards in your hand, you can Tribute this card to select 2 "Infernity" monsters in your Graveyard. Special Summon those monsters./
CARD ID: 86197239
Powered by yugioh.wikia.com 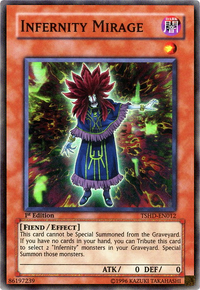 This card's artwork has a resemblance to Native Americans of the 1800s (which fits with the wild west theme of the Infernitys released in the same pack as this card).

The first sentence of the effect is a condition, not an effect.

Tributing "Infernity Mirage" is a cost to activate its effect. The effect targets 2 “Infernity” monsters.