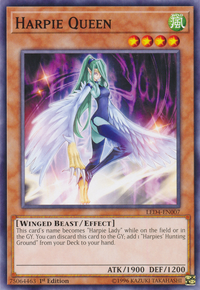 Of all the Field Searcher monsters, Harpie Queen along with “Glife the Phantom Bird” and “Salamangreat Balelynx”, are the only ones that don’t have the background of their corresponding Field Spell that they can search. Harpie Queen has the highest ATK for a card that is treated as Harpie Lady. Though there were other cards with the effect to change their name at the time of this card’s release, this was the first one to have its name treated differently while it is in the Graveyard as well. For some reason, Harpie Queen is depicted such that there is only 1 visible talon hand (as the end of the other wing goes off the edge of the card). In Duel Terminal, you do see two full wings, and both have a talon hand. In Duel 018 of the Duelist manga, Mai Valentine referred to a group of powered-up Harpie Lady Sisters as Harpie Queens. This is likely coincidental, as they bore little resemblance to this card. This monster is featured in the artwork of The Big Cattle Drive and Alluring Mirror Spirit. Interestingly, the artwork for the former depicts her with two talon hands while she is depicted with only one in her artwork.

The "You can discard this card to the Graveyard; add 1 "Harpies' Hunting Ground" from your Deck to your hand." effect is an Ignition Effect that is activated from the hand. (Discarding "Harpie Queen" is a cost to activate this effect.)

If you have no "Harpies' Hunting Ground" in your Deck, you cannot activate the effect of "Harpie Queen".

The "This card's name becomes "Harpie Lady" while it is on the field or in the Graveyard." effect is not treated as an Ignition, Trigger, Quick or Continuous Effect.

If "Skill Drain" is active on the field, while "Harpie Queen" is on the field its name will not be treated as "Harpie Lady".

If “Prohibition” is activated choosing “Harpie Lady”, “Harpie Queen” will not have its name treated as “Harpie Lady” and can still attack and change its battle position.