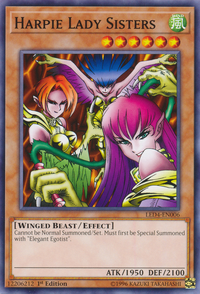 The ATK, DEF and Level of this card are half the combined sum of the ATK, DEF and Levels of 3 Harpie Ladies. (Alternatively, they are all 1.5 times the stats of Harpie Lady.) This monster appears in the artwork of Triangle Ecstasy Spark and Harpie Lady Elegance. The individual sisters were later made into Harpie Lady 1, 2 and 3. Rose Whip and Cyber Shield appear in this card's artwork. This card's OCG/TCG artwork is loosely taken from Yu-Gi-Oh! Duelist - Duel 011, specifically from the panel where Harpie Lady is split into 3 duplicates via Kaleidoscope. Curiously, the TCG artwork leaves Harpie Lady 3s cleavage intact, despite covering them up as in other cases.

This monster is a Special Summon Monster. Therefore, it is not possible to Tribute Summon it.

The effect to "destroy 1 Spell or Trap Card on the field" of "Harpies' Hunting Ground" is mandatory, so it will activate even if "Harpie Lady" or "Harpie Lady Sisters" is Special Summoned during the Damage Step.

Harpies' Hunting Ground: If you control "Harpies' Hunting Ground" on your side of the field, because it is a Field Spell Card, it's effects apply to both players. When either player Normal Summons or Special Summons a "Harpie Lady" or "Harpie Lady Sisters" to the field, the controller of that newly-Summoned monster is the one who selects 1 Spell or Trap Card and destroys it.

Triangle Ecstasy Spark: If there are multiple copies of "Harpie Lady Sisters" on the field, the ATK of each becomes 2700 until the End Phase.