Quick-Play / SpellIf you control "Macro Cosmos": Inflict 300 damage to your opponent and destroy all monsters on the field.
CARD ID: 38430673
Powered by yugioh.wikia.com 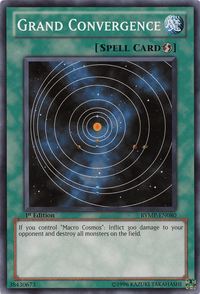 Much like the Japanese name suggests, there was a cross in the background of the OCG artwork that was edited out in the TCG to avoid religious affront but was still shown on the dub card in the GX anime. The Japanese name of this card (Grand Cross) was also an attack used by a handful of bosses in Final Fantasy games that inflicted random status effects.A Grand cross is an astrological event where four planets are aligned in such a way that they are 90 degrees apart from each other and form a perfect cross. The planets are each of a different elemental alignment (fire, wind, earth, water), and thus a Grand Cross is often seen as a sign of tension and inability to progress because the different aspects of the personality are at odds with each other.The card artwork is likely a depiction of our Solar System before 2006, when Pluto was counted as the system's ninth planet, hence why there are 9 rings being the orbit of all 9 planets. This card has a Speed Spell counterpart, Speed Spell - The End of the Storm.

This card can only be activated while "Macro Cosmos

Applying "Inflict 300 damage to your opponent" and "destroy all monsters on the field" are treated as being done at the same time.

"Grand Convergence" can be activated even if there are no face-up monsters on the field. (In that case, only apply "Inflict 300 damage to your opponent".)

Inflicting 300 damage and destroying all monsters on the field are both resolved at the same time.

If the 300 damage would be reduced to 0 by the effect of "Des Wombat" or "Pikeru's Circle of Enchantment", "Grand Convergence" can still be activated and all monsters on the field will still be destroyed.

If an effect that destroys "Macro Cosmos" or removes it from the field is chained to "Grand Convergence", the effects of "Grand Convergence" will still resolve because the activation conditions were correct when it was activated.

"Barrel Behind the Door" can be chained to this card.

If there is a monster on the field, you can chain "My Body as a Shield" to this card.