4If this card is Normal or Special Summoned: You can send 1 "Orcust" or "World Legacy" card from your Deck to the GY, then, if there are 2 or more other cards in this card's column, treat this card as a Tuner this turn. If you control no other monsters: You can Special Summon 1 "World Legacy Token" (Machine/DARK/Level 1/ATK 0/DEF 0) to both players' fields in Defense Position. You can only use each effect of "Girsu, the Orcust Mekk-Knight" once per turn.1800/
CARD ID: 69811710
STATUS TCG: Unlimited
Powered by yugioh.wikia.com 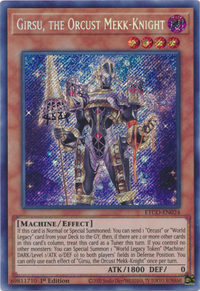