Gateway of the Six

Continuous / SpellEach time a "Six Samurai" monster(s) is Normal or Special Summoned, place 2 Bushido Counters on this card. You can remove Bushido Counters from your field to activate these effects.
● 2 Counters: Target 1 "Six Samurai" or "Shien" Effect Monster; that target gains 500 ATK until the end of this turn.
● 4 Counters: Add 1 "Six Samurai" monster from your Deck or GY to your hand.
● 6 Counters: Target 1 "Shien" Effect Monster in your GY; Special Summon that target.
CARD ID: 27970830
STATUS TCG: Limited
Powered by yugioh.wikia.com 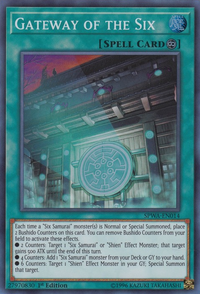 This card is a Six Samurai version of The World Tree. This card works in a similar way to Black Whirlwind. This card appears as the front entrance of Temple of the Six and its widescale view Shien's Dojo. This card was the first Six Samurai support card to be limited. It would later be followed by Shien's Smoke Signal in September 2011.