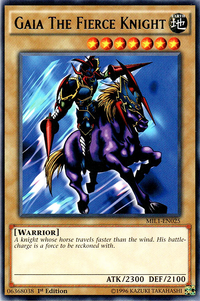 This monster has several counterparts. Retrained: 4 Arisen Gaia the Fierce Knight Charging Gaia the Fierce Knight Lord Gaia the Fierce Knight Swift Gaia the Fierce Knight Fusion: 3 Gaia Drake, the Universal Force Gaia the Dragon Champion Sky Galloping Gaia the Dragon Champion Miscellaneous: 3 Link: Gaiasaber, the Virtual Knight Synchro: Gaia Knight, the Force of Earth Xyz: Gaia Dragon, the Thunder Charger This monster has a counterpart for almost every type of Monster Card. If one counts Black Luster Soldier (explained below), Gaia has a counterpart for every type of Monster Card. In the manga (and some of the video games), this card is required to Ritual Summon Black Luster Soldier. The Bandai version of this card is Level 6, has a blue horse and 1600 DEF, the Konami card is Level 7, has a violet horse and 2100 DEF. This card being a protagonist's purple Warrior-Type Monster of the same card type as its user's ace with 2300 ATK, power up capabilities based on other monsters, and being the start of a monster archetype that its user frequently uses is a trend carried on by Junk Warrior and Decode Talker (though the latter is a only a warrior aesthetically). Either this monster or Swift Gaia the Fierce Knight appears in the artworks of Spiral Spear Strike, Hero's Guild and Baton of the Hero. This monster can be seen on Pharaoh Atem's side of the field on the Tablet of Lost Memories. In the Yu-Gi-Oh! Toei anime, this monster's horse was colored brown. This card's first OCG/TCG artwork is taken from , specifically from the panel showing this monster being Summoned. This card's second OCG artwork is taken from , specifically from the panel in which this monster undergoes the effect of Black Luster Ritual to become Black Luster Soldier. This monster's horse appears in the artwork of Dark Cavalry, which itself represents visually a Fusion between this card and Dark Magician.