4If this card is flipped face-up: Destroy all Special Summoned monsters on the field. Neither player can Special Summon monsters.1200/1300
CARD ID: 42009836
Powered by yugioh.wikia.com 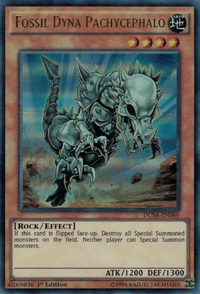 This monster is based off of a Pachycephalosaurus, which translates to thick headed lizard. Also, this card is skeleton/fossil counterpart to Fire Opalhead, another monster based on a Pachycephalosaurus. This is one of three noticeable Rock-Type monsters that are based on dinosaur bones, with the other two being Fossil Dragon Skullgios and Flint Cragger. This card's effect is similar to the effect of Jowgen the Spiritualist. Both monsters also have the same DEF.

Trap Eater: If “Vanity’s Fiend” or “Fossil Dyna Pachycephalo” are on the field, but “Skill Drain” is preventing their effects from blocking Special Summons, you can Summon “Trap Eater” even by sending “Skill Drain: Crimson Crisis -- Card Rulings (version 2.0)

If a card like "Vanity's Fiend" or "Fossil Dyna Pachycephalo" has its effect negated by "Skill Drain", then you still can send "Skill Drain" to the Graveyard to Special Summon "Trap Eater".

If "Vanity's Fiend" or "Fossil Dyna Pachycephalo" is on the field, then "Reasoning" and "Monster Gate

"Fossil Dyna Pachycephalo's" first effect is a Continuous Effect. Its second effect is a Trigger Effect.